The commercial market for satellite communications is experiencing steady growth in business sectors, driven by the need to provide network connectivity in remote locations that can’t be reached by traditional terrestrial networks and other technology advances. Satellite is a proven and highly reliable connectivity option for remote oil and gas operations, emergency response, commercial vessels, isolated locations and Internet of Things (IoT) applications.

Depending on the application, budget and a variety of other requirements, organizations have several choices for enabling IP communications over satellite. Two of the most popular forms are VSAT (very small aperture terminal) and BGAN (broadband global area network). In this post, we’ll compare the two and highlight some additional deployment considerations.

The Inmarsat BGAN network comprises four satellites, while VSAT networks operate using multiple satellite carriers, including SES, EchoStar and Intelsat, among others. Generally speaking, VSAT solutions are faster and move more data, but BGAN solutions are more portable and easier to set up. Here are some of the key distinctions:

Expenses (Application Dependent). Satellite service with BGAN is more expensive than VSAT, but BGAN hardware is typically more affordable. BGAN portable satellite terminals are roughly the same cost as an entry-level VSAT setup, but only a small fraction of the cost of auto-point VSAT systems. Therefore, the application will determine the best fit for the customer’s application needs.

Coverage (Worldwide Advantage BGAN but a draw in the United States). To cover the globe, BGAN satellites are in a geostationary orbit 22,500 miles above the equator and synchronized with the rotation of the earth below – staying fixed relative to the earth. This makes them accessible from anywhere on the globe except higher latitudes approaching the north and south poles. VSAT also uses geostationary satellites, but the coverage is not as seamless because it typically is more geographically focused. For wide geographic coverage, users typically need separate contracts on multiple satellites potentially owned by multiple providers. However, in the United States, southern Canada and the Caribbean, VSAT and BGAN share the advantage of offering full coverage.

Terminal Setup (Advantage BGAN). BGAN is designed to be installed and used by technical or non-technical users. It takes only a few minutes to complete the setup and establish a connection with a BGAN terminal. VSAT systems require a trained technician to set up a fixed VSAT terminal. However, more expensive systems with auto-pointing features significantly improve the ease of VSAT setup.

Portability (Advantage BGAN). BGAN terminals are lightweight and extremely portable. Auto-tracking BGAN antennas can also facilitate communications while in a moving vehicle. This mobile connectivity is a particularly valuable feature for utility and energy companies that need to maintain real-time contact with crews in the field. In contrast, even the most portable VSAT units are roughly 1.2 meters (four feet) in diameter.

SageNet offers a hybrid solution taking advantage of the best features of VSAT, BGAN and terrestrial connectivity options. For example, one hybrid solution is the Armadillo Advantage that integrates VSAT technology and a BGAN terminal in a weatherproofed housing, along with a remotely managed router. Service is automatically switched from the primary VSAT to BGAN to ensure seamless connectivity, and service is automatically switched back to VSAT once a connection is reestablished.

In summary, VSAT and BGAN each have their own unique advantages in delivering highly reliable satellite services. The customer’s coverage, applications, management, network availability and budget will determine if use of VSAT, BGAN or a hybrid solution is recommended. 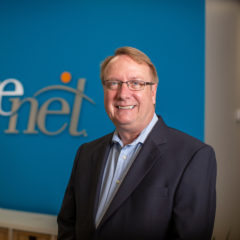